The general size of the folding stage is generally: 1m * 2m; 1.22m * 2.44m, which is characterized by relatively light, when you can not fold up, greatly reducing storage and transportation costs. Moreover, this stage also with wheels, a girl on the easy to promote the installation of such a stage. This stage is favored by the majority of the hotel, people usually also called: the hotel stage, the hotel special stage, the hotel mobile stage. Hotel stage is simple stage: 1m * 2m, 1.22m * 2.44m, these are generally only four stage foot support, relatively expensive, often relatively low load, pull the stage is characterized by easy to carry, Suitable for general small meeting rooms.
Aluminum alloy stage: easy installation, light, environmentally friendly, energy saving, easy transportation, simple collection, no rust, solid structure, beautiful appearance, easy to save, simple connection, the production process is very environmentally friendly and energy saving, Wear-resistant, no damage, decorative and other characteristics, welcomed the new and old customers advice. 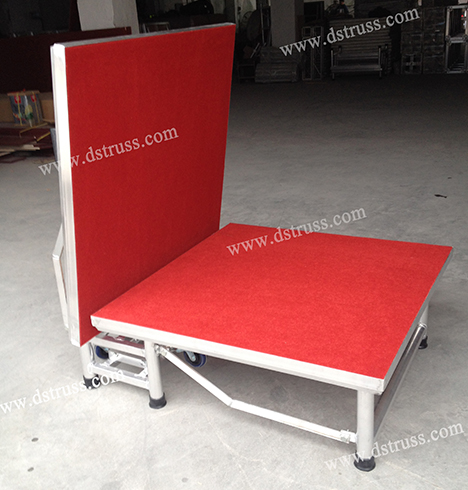 About Us
History
Company
Products
News
Contact
Work with us

Contact Us
Fill out this form and contact us regarding any booking
query you have, questions or requestsand we’ll be
happy to assist you!